Wanted to share that Sydney and I are part of a group show up in the 280 SITE gallery right now called Fantasy / Reality / Decay. It runs through March 11 when we’ll be having a closing reception – more details to come on that. The gallery is also being activated this afternoon from 4:30-5:30 with a site-responsive performance by Keny De La Peña.

If anyone would like a walk through of the show let me or Sydney know! We’d be happy to show you around. 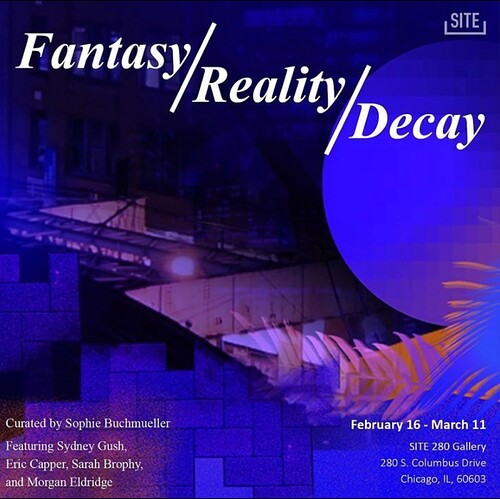 Fantasy / Reality / Decay
Seemingly at the drop of a hat, the corporate office became largely obsolete. With the onset of the pandemic, workers emptied out of downtown business districts and suburban office parks, retreating to work from their kitchen tables or spare bedrooms. Nearly two years later, the office real estate market remains in crisis; as remote work becomes a long term feature of American white collar society, office buildings continue to sit unused. “When faced with a totally new situation,” media theorist Marshall McLuhan writes, “we tend to always attach ourselves to the objects, to the flavor of the most recent past. We look at the present through a rear-view mirror. We march backwards into the future.” Positioning ourselves at an inflection point, Fantasy / Reality / Decay explores the corporate office as an impossible space—a setting historically imbued with manifold associations, promises, desires, and frustrations, yet also one whose future no longer holds. How can we, in looking back at the American office, devise alternative ways to interact in this liminal environment?

Fantasy / Reality / Decay seeks to distort cultural associations of the office, especially the individualistic, capitalist aspirations of the space and the more mundane—even depressing—qualities of working life. The gallery installation does not accurately recreate a corporate office setting so much as construct immersive situations inspired by its quintessential features, in order to imagine speculative, dreamlike futures for objects left behind when employees evacuated, and propose new models for engaging with them and each other in these failed spaces. The objects assembled within the gallery draw out the dissociations created by such liminal spaces, considering how hopeful fantasies tie into functionality and how unrealized promises lead to decay.

The exhibition is a collective endeavor by Sydney Gush, Morgan Eldridge, Eric Capper, Sarah Brophy, and Sophie Buchmueller. Born from an intentionally collaborative process, Fantasy / Reality / Decay seeks to transform the gallery into a communal and relational environment in which objects, made both by specific artists and collectively, communicate with each other. Not only does this integrated mode of display reflect the show’s curatorial process, but it also conceptually underscores a rejection of the hierarchical, individualistic, alienated nature of capitalist work culture.